Is Your Collarbone Size English, Irish, or French?

When I'm not playing Baldur's Gate 3, I'm generally trying to do some work on my writing. And that requires research.

I love doing research. So much so, I am often guilty of going down rabbit holes that have nothing to do with what I started out researching. I'm not alone in this, right?  Right?

So anyway, I was doing some research amongst old newspapers, as you do, and one search keyword lead to another and I stumbled across this in The National Gazette (Philadelphia, Pennsylvania) from 5 November 1829. 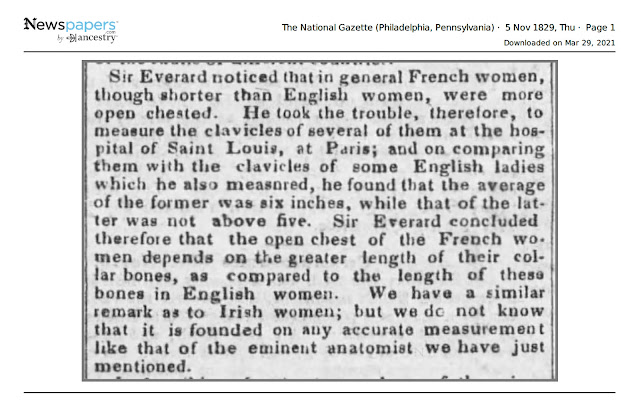 Okay.
So aside from that last remark about Irish women -- and just what is that, by the way? Is he saying Irish women are "open chested" like French women? Is this some weird way of coding English women as more demure and refined than French and Irish women?
Ahem.
Aside from that.
This "eminent anatomist" has "noticed" French women are shorter and more "open chested" than English women, so decides to make a study of women's clavicles?  Is this science or an excuse to go around touching random women's décolletage?
He measures the clavicles so... valid science. Definitely. And I have "noticed" that many European chocolates are more creamy and tasty than American ones, so please fund my study into eating chocolate from every country.
Seriously, this clavicle research sounds more like a naughty schoolboy prank than science.
The clavicle is your collarbone. So he's not really measuring chests/ribcages, he's measuring shoulders. But if he were talking about shoulder-wideness, the term would be "broad shouldered," not "open chested."
So I think what he's really talking about is breast size. He's trying to determine which country's women have the larger breasts.
What does this achieve? I mean, in the field of women's health. How does this study help... anything?
It's almost as if the study is being done for men to be able to choose the breast-iest country to visit, not for the benefit of women.
And, historically, that's kinda how the medical field rolled. It's always been done for the benefit of men.
Women were treated as mere engines of childbirth, inferior to men. They didn't need their own medical research results. Men's results would do just fine.
Is it better today?
Women are underrepresented in clinical trials,  which means they can have more unexpected side effects from medication.
Women are left out of much medical research,  so it is impossible to know if some diseases or vaccines affect women differently.
Black women have to fight to get doctors to believe them about their symptoms. Plus size women have the same difficulty. Fighting their doctors' condescension, bias, and racism puts women's lives at risk.
So, no. The medical field still has a distance to go.
But at least they're not trying to relate breast size to country of residence.
Posted by Susanne Saville at 1:30 PM No comments:

Baldur's Gate 3 Early Access recently added Druid as a class one can play, and it is wild. You can shape shift into a cat, and a wolf, and a badger! And more!
But Druids aren't the only nature-loving faction in the world of Baldur's Gate 3. When exploring the Druid Grove, you discover the existence of Harpers, who are depicted in a beautiful mural. Not so beautiful are the Shadow Druids. The book Secret Societies of the Sword Coast: Exposed has entries for both of them.
Shadow Druids and Harpers 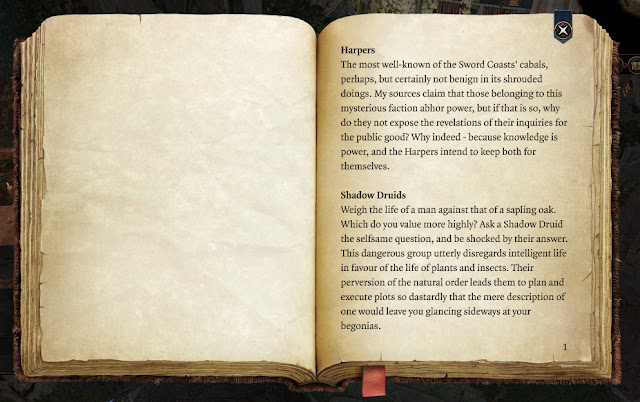 Might we be able to join one of these factions as a Druid? We shall have to wait and see.
But there's more. Some secret societies hide in the shadows for malevolent reasons.
Dark Justiciars and The Order of Klurd 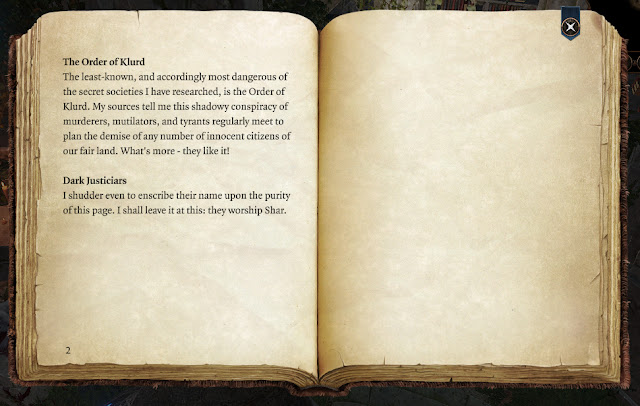 The Order of Klurd reminds me of the Dark Brotherhood. If you've joined the Dark Brotherhood in Elder Scrolls Online, you know that there can be a lot of camaraderie within the, admittedly bloodthirsty, organization, so this could be a cool order to join.
Of more immediate interest to the player character are the Dark Justiciars. They are a formidable force, and they are believed to be lurking along our path through the Underdark, which is already a difficult and scary place. Also dark.
Very dark.
Baldur's Gate 3 (at least so far in Early Access) provides a myriad of choices for the player character, giving you an amazing amount of agency in determining how the plot unfolds. You aren't required to risk the Underdark, you can choose to travel overland.
However, two of the companions, Astarion and Shadowheart, are interested in the Dark Justiciars. And I think we've established how I feel about Astarion.
So Underdark, here I come.
Posted by Susanne Saville at 1:00 PM No comments:

I particularly love this book because it breaks the fourth wall as well as gives you pertinent in-game information. 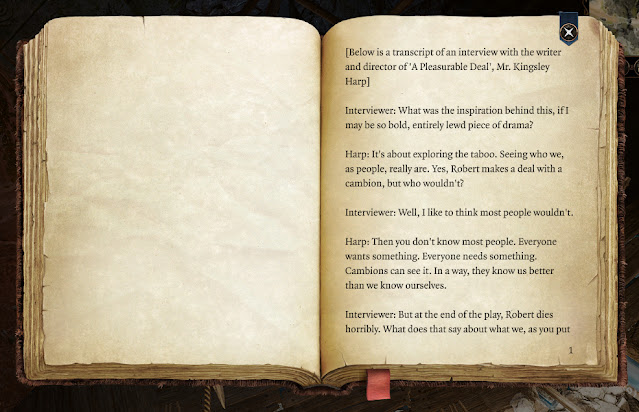 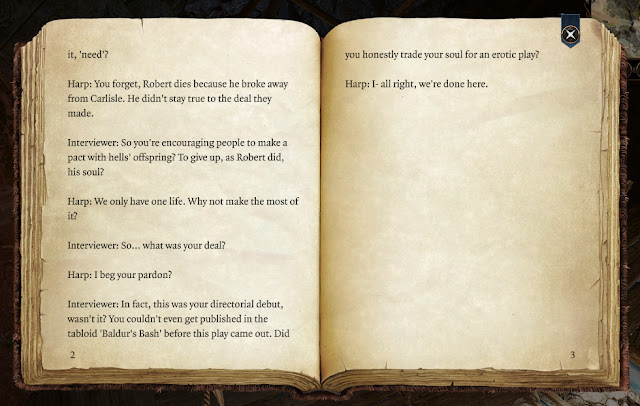 Kingsley Harp made his deal to become successful and famous with an "entirely lewd piece of drama."
I can understand that. **cough cough** romance writer **cough cough**
But beyond the amusement and relatability factors, this text is yet another piece in the Baldur's Gate 3 world tapestry informing the player that making a deal with a cambion is not an uncommon thing in this universe. And making such a deal with a cambion -- or rather the pros and cons and complications of such a deal, are very relevant to you:
A cambion is half-human half-demon. But it looks like a devil, and deals with the devil go back hundreds of years, at least as far as the late 16th century. Humans don't do well when they interact with the devil, unless you're a phenomenal fiddler:
or you have a phenomenal lawyer:
Daniel Webster was a real person, an American lawyer (1782 - 1852) who lived in, worked in, and represented New Hampshire and Massachusetts.  He was considered the best orator of his day.  His speeches were studied in schools - even during his lifetime. So it's a huge, and believable, compliment that he could out-talk the devil.
I've never actually seen or read The Devil & Daniel Webster (it started out as a short story). But I've seen the animated Devil And Daniel Mouse. Anyone else seen that?
Anyway, if we make a deal with a cambion in Baldur's Gate 3, will we permanently lose our soul or will we be able to smooth-talk our way out of it later?
Or will we be able to find someone offering a better deal to save us?  Only time will tell.
Posted by Susanne Saville at 2:00 PM No comments:

Curse of the Vampyr || Series: Books Of Baldur's Gate III

This book, Curse of the Vampyr, can be found in the library right before the bridge to Minthara. Since Astarion is my game crush, I had to pick it up. 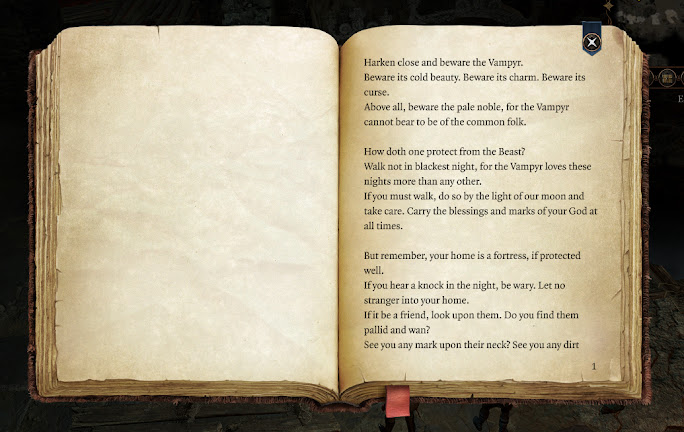 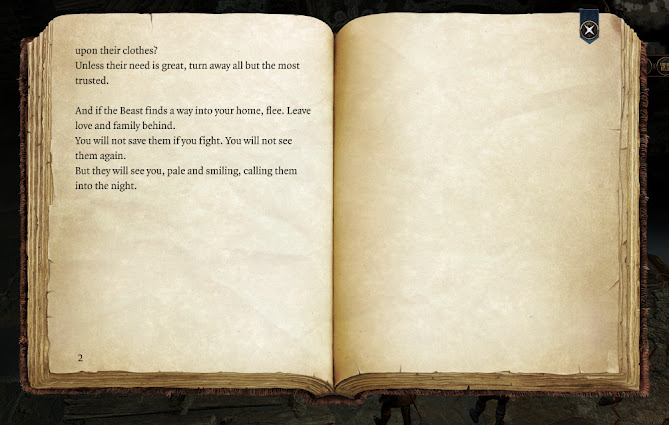 Cold beauty? Check.
Pale noble? Check.
Charming, with a bite mark on his neck? Check.
Yep, that's Astarion. 😊
Actually, that's Cazador.
Cazador is Astarion's vampire sire. Astarion is only a vampire spawn, while Cazador is a cruel, evil vampire. Not sexy. Not sparkling. Cazador is a psychopathic serial murderer.
And we Astarion-lovers can't wait to kill him, as he was not kind to his spawn.
Astarion's very real fear of returning to Cazador makes him the only companion who approves of continuing to use your special powers, even when negative side effects appear.
One of those negative side effects is terrible nightmares. In Astarion's case, nightmares of Cazador:
If you've watched any of the many (many!) videos of Astarion out there, you will have noticed Astarion is a very unique sort of vampire.
"It doesn't look broken. Then again, none of us do."
Astarion is both giggly and sardonic, proud and self-effacing, insulting and sometimes kind, thoughtful and chaotic, brave and fearful, intent on saving himself and interested in the rest of his companions. He's multi-faceted and fascinating.
And he's actually more of a vampire than Cazador.
Or rather, Cazador is a modern literary vampire. He is a threat, as in Dracula (1897).
But Astarion is closer to the ORIGINAL literary vampire, seen in Lord Byron's Fragment of a Novel (1819) -- the Cool Best Friend.
The Byronic vampire is the fascinating, talented guy everyone wants as a friend, and if you're lucky enough to become his best friend, you feel flattered and honored that he chose you.
The bond this type of vampire shares with his (male in this case) best friend is the most important part of his life (un-life).  His human is sworn to keep the secret of his vampire-ness, but honor is all that binds them.
You'll notice this is the opposite of a Dracula-type vampire. No hypnosis. No madness and eating bugs a la Renfield. (You'll also have noticed Cazador treats Astarion in precisely this Dracula-defined manner, controlling his body, forcing him to eat rats and insects.)
The Byronic vampire may eat blood, but we never see it. It's not particularly important to his story. They are buddies who travel around together. That's the story as Byron wrote it.
And that's precisely what Astarion offers.
So if Larian allows the player character to affect their companions' alignment in Baldur's Gate 3, this will fit in perfectly with vampire canon.
Swaying Astarion to evil, like Cazador, would make him a Dracula-type vampire. Swaying him to good would make him more of a Byronic vampire.
I look forward to having a Byronic vampire at my side.
Posted by Susanne Saville at 2:00 PM No comments:

I love this scene. It's so cute and romantic.
And, for all those Medieval scholars out there, this scene reminds me of a posy that was often engraved inside Medieval marriage rings:
Many are thee starrs I see, but in my eye no starr like thee.
This isn't the first time Astarion has made a literary reference. Well, it's not a reference per se. It's... a literary euphemism?
I just love the Larian writers.
Posted by Susanne Saville at 1:00 PM No comments: