Interview with Nicholas Lea at DragonCon 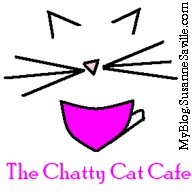 Periodically I ask People I Really Like if I can interview them for the segment of my website I call The Chatty Cat Cafe.

Nicholas Lea being one of those People, I requested an interview at DragonCon. He graciously agreed.

However, you think YOUR DragonCon is busy? I got a glimpse of how busy it can be for the guests.

First, we were going to do lunch, but he never got a lunch break. We rescheduled for late afternoon, but the fans kept coming.

Mr. Lea - ever humble and self-effacing - was certain people would stop arriving at his table on the Walk of Fame any moment. They never did. He severely underestimates the size and dedication of his fan base. There was always someone who wanted to tell him what they'd seen him in and what it meant to them.

So we ended up doing this interview in between fan visits on the floor of the DragonCon Walk of Fame.

Note: Mr. Lea's words are in ALL CAPS just to make this easier to read. He wasn't shouting. Well, except to be heard over the din. :)

EDIT: Changing "Nic" (which should be "Nick") to "Mr. Lea" since it's really presumptuous of me to be calling him anything other than that or Sir. :) 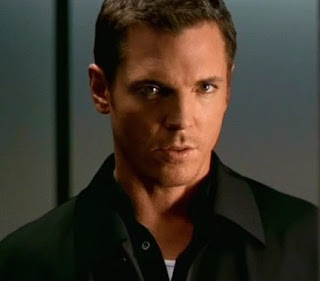 Me: Right. Okay. Pretend we’re at a cafe. What’s your favorite hot beverage?

NL: COFFEE. STRONG. USUALLY WHAT I DRINK WHEN I GO OUT TO GET COFFEE IS DARK ROAST WITH A LONG SHOT OF ESPRESSO.

Me: Do you have any pets?

NL: I HAVE THE BEST DOG IN THE WORLD. I’LL SHOW YOU A PICTURE. HIS NAME’S JIMMY STEWART. HE TURNS 10 IN ABOUT A WEEK. AND WHEN YOU COME IN THE DOOR HE SMILES AT YOU.

THAT’S HIM SMILING BECAUSE HE’S SO EXCITED.

*shows photo of adorable Jack Russell terrier showing every last one of his teeth in a huge, wolfish grin*

Me: (laughing) He looks ferocious!

NL: I KNOW BUT HE’S LIKE, HE’S MY BEST FRIEND. I’LL SHOW YOU A GOOD PICTURE.

I DON’T THINK I’VE LOVED TOO MANY THINGS IN MY LIFE MORE THAN HIM. HE'S GOT THE MOST BEAUTIFUL EYES. I COULD TALK ABOUT MY DOG ALL DAY.

Me: Jimmy Stewart, you said? Is that your favorite actor or did your dog’s personality remind you of him?

IT’S A WONDERFUL LIFE IS ONE OF MY FAVORITE FILMS.

Me: Of all your roles, which comes closest to your dog’s personality?

NL: I DID A MOVIE CALLED SHOT IN THE FACE THAT YOU’LL NEVER SEE. IT’S A COMEDY. I’M A FUMBLING BANK ROBBER. HE’S AN IDIOT. HE’S A COMPLETE IDIOT.

Me: But good-hearted we assume?

NL: UMM. SOMEWHERE IN THERE. YEAH.

Me: If money were no object, what would you do?

NL: OH, I THINK IF I COULD BE DOING ANYTHING, I’D EITHER BE SINGING, PLAYING AND SINGING, OR PLAYING GOLF PROFESSIONALLY.

I MEAN, LISTEN, WHAT I DO, I LOVE.
BUT I WORKED ON A SHOW CALLED MEN IN TREES, AND THE CREATOR OF THE SHOW FOUND OUT THAT I SING, AND WANTED TO KNOW WOULD I SING ON THE SHOW? I SAID FOR SURE, AND SHE SAID WOULD YOU WRITE THE SONG? AND I SAID FOR SURE. SO WE WENT INTO THE STUDIO AND RECORDED A COUPLE SONGS AND THAT’S AS CREATIVELY FULFILLING AS I’VE PROBABLY EVER FELT.

Me: You need to do an album. That’s not a question. That’s a command.

NL: (laughing) DID YOU SEE ME AND DUCHOVNY SINGING ON YOUTUBE?

Me: Do you get nervous before going on stage?

Me: What do you do to relax?

Me: What’s your favorite song to sing?

NL: I’M NOT GOING TO SING IT FOR YOU.

NL: I LIKE SINGING THE ELVIS SONG LOVE ME. I WON’T SING IT FOR YOU. BUT YOU’LL FIND IT SOMEWHERE. IT’S A GREAT SONG.

*interviewer stumbles, forgets next question, apologizes for being so nervous*

Me: You can act, and you can sing. Are you a triple threat?

NL: CAN I DANCE? YOU KNOW, I THINK I CAN DANCE, BUT I NEED TO HAVE SEVEN OR EIGHT COCKTAILS BEFORE I DO IT. AND THAT’S NOT THE MOST….

IF I WERE TO DO IT PROFESSIONALLY….

I’M NO CHRIS WALKER, LET’S PUT IT THAT WAY. (laughing) I THINK I’M A PRETTY GOOD DANCER. I HAVE A GOOD SENSE OF TIME.

Me: So you could be in a musical!

Me: Do you like performing on film better than stage performances?

NL: YOU LEARN MORE ON STAGE. YOU LEARN MORE ABOUT HOW YOU WORK AS AN ACTOR ON STAGE. BUT FILM IS MORE IMMEDIATE AND MORE EXCITING. YOU FIND THAT YOU DON’T NEED TO DO AS MUCH. IT’S LIKE GOLFING. IF YOU HOLD THE CLUB TOO TIGHT AND SWING TOO HARD, YOU’RE IN TROUBLE. IF YOU JUST RELAX AND VISUALIZE AND BE ATHLETIC, THEN SWING EASY, YOU’LL BE FINE.

NL: BECAUSE IT’S LIKE ACTING. USES THE SAME SIDE OF MY BRAIN. CALMNESS. CERTAIN KIND OF MENTAL ATHLETICISM AND VISUALIZATION AND TRUST. YOU CAN’T SWING A CLUB WITHOUT KEEPING YOUR HEAD DOWN. THE MOMENT YOU LIFT YOUR HEAD UP TO WATCH WHERE IT (the golf ball) GOES YOU’RE IN TROUBLE. YOU HAVE TO TRUST THAT IT’S GOING TO GO WHERE YOU WANT IT TO GO.

Me: This is off topic but, how did you hurt yourself?

Me: (winces) What were you doing?

NL: I WAS TRYING TO PUT UP SOME PLASTIC TARPING AND I HAD TO PUT A HOLE THROUGH TWO PIECES OF PLASTIC USING BRAND NEW SCISSORS AND I WENT (ferociously stabs the air with invisible shears and strikes finger)

I HAD TO GET ON A WATER TAXI IN THE MIDDLE OF THE NIGHT AND GO TO THE CLOSEST HOSPITAL AND…. YEAH. IT WAS DRAMA. UNWANTED DRAMA.

This then devolved into plans for world domination procedures for giving him a choice of audiobooks to narrate, before we ended the interview and he kissed me goodbye.

Whereupon I was a complete professional and did not swoon on the Walk of Fame floor. I am very proud of myself for that.

Although I might possibly have been seen running around in circles on the sidewalk, with flailing Kermit-arms, yelping:

But... let’s keep that last bit between us, yeah?

Interested in more interviews? Check out THE CHATTY CAT CAFE

Wondering if the hero on the cover of my latest intentionally bears a striking resemblance to Krycek?

And if you've seen SHOT IN THE FACE, let me know in the comments!
Posted by Susanne Saville at 11:17 AM